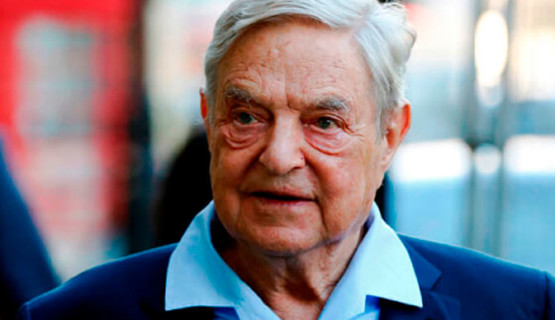 George Soros (George Soros) has lost money. A lot of money, even for someone like him. The victory of Donald Trump cost him about one billion dollars. Like many others in this field, the investment fund manager has been expecting chaos in financial markets and a fall in rates in case of unpredictable investment magnate wins the race for the White House

Instead, punters were celebrating the victory of Trump and were enthusiastically buying stock because they had hope that with the help of Trump the taxes would be lower. The Dow Jones had risen for almost 10% till present day.

But despite the loss of billions of dollars, Soros remains unconvinced. At the World’s Economic Forum in Davos, he made a uniquely gloomy outlook. Trump is the adventurer, who would like to become a dictator.

Sooner or later, the players, according to Soros,will wake up and cause the collapse of the markets. The reason is that Trump will lose with its policy. “The uncertainty is at its highest level, and uncertainty is the enemy of investment,” – said Soros in Davos. “Punters are still celebrating the victory of Donald Trump, but someday reality will prevail.”

The world is full of risks

In spite of his recent losses, the 86-year-old financier is considered to be the most successful investor in the world. As a child–originally from Hungary–he had to run from the Nazis and almost out of nothing, he made a fortune in almost $ 25 billion. Today he is one of 30 richest people in the world.

Now he sees a number of risks that threaten the world. So, it is Soros who considers that President Trump would unleash a trade war with China. And a real war can easily arise from a trade war.

He believes that Europe, too, will face hard times. After the vote of Brexit, the continent is going through a test of strength, and these corrosive forces have become stronger as a result of Trump’s election. “If Europe falls apart, the consequences will be dramatic. The old world is moving in the wrong direction. “

The European Union has simply become too difficult and unpredictable for people. “People feel alienated and anti-European parties strengthen their influence.”

This is not the first time, Soros has presented a gloomy scenario in Davos. Last year, he counted on the collapse in China. Indeed, the sale began, but the government in Beijing has taken steps and has made changes in the situation. Now he sees China more powerful as a result of the election of Donald Trump. The Communist Party, he said, would skillfully form new alliances and trade agreements. “China is at a crossroad between open and closed society,” – Soros said. But today, his words do not sound too optimistic.

But this year, Soros – is not the only superinvestor who is in a pessimistic mood. The words of Ray Dalio from Bridgewater caused stir. “I am afraid of populism.”The reason is that it is too difficult to fight against this phenomenon. In contrast to the classical economic or financial crisis, “no banks”, says he will be able to save the world through interventions. Uncertainty reigns in the World Economic Forum.

Bill Browder the founder of the Hermitage investment fund, Capital, has been coming to Davos for 21 years: “The first time absolutely nobody knows in which direction the development will happen.” In some sense, everyone is looking into the abyss.